Phase one of a restoration project at Hampton Court Palace is complete... 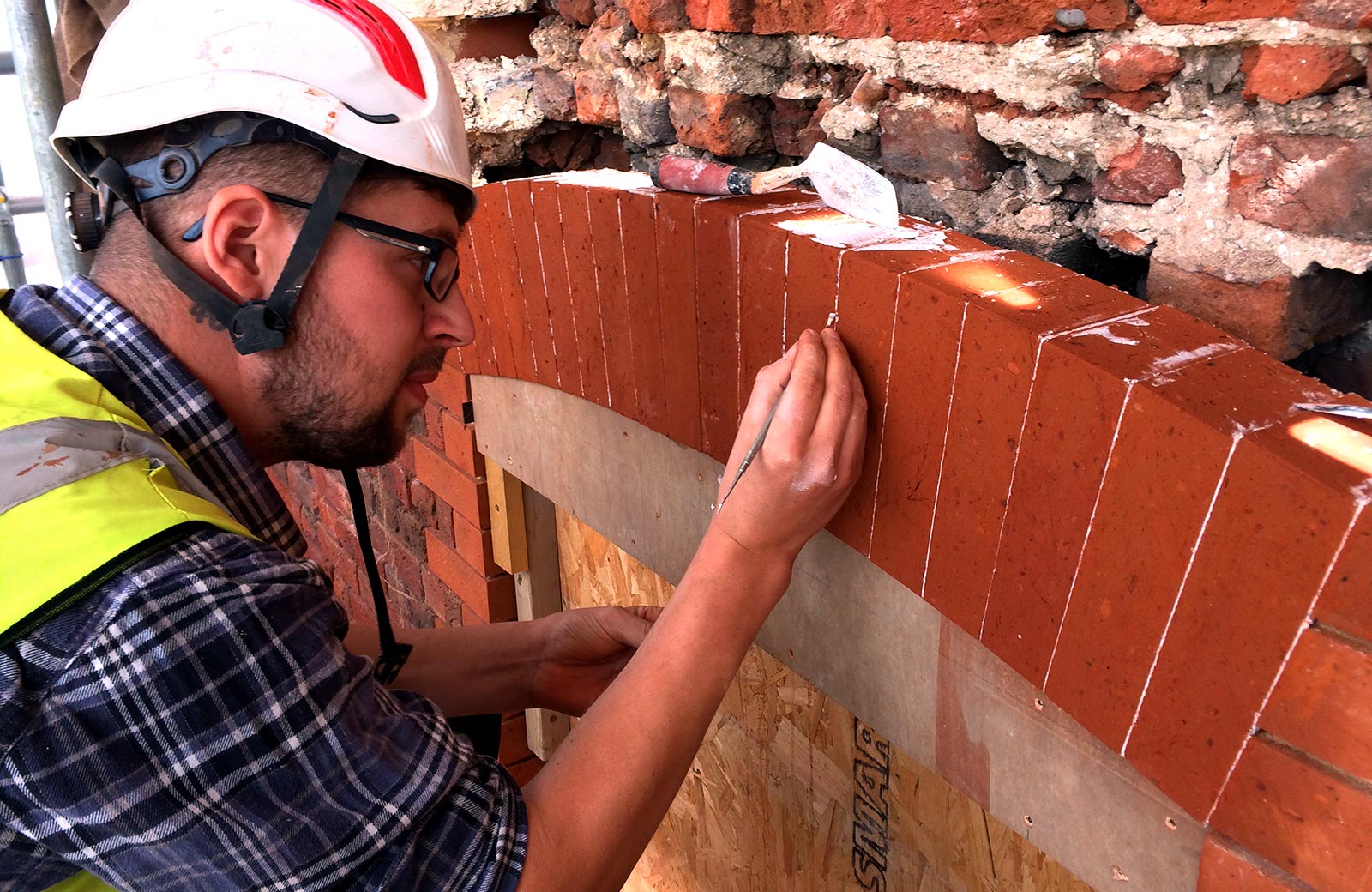 June 2019
GHK have completed the first of four phases in a project to deal with the delaminating brick facework to the Barrack block at Hampton Court Palace. 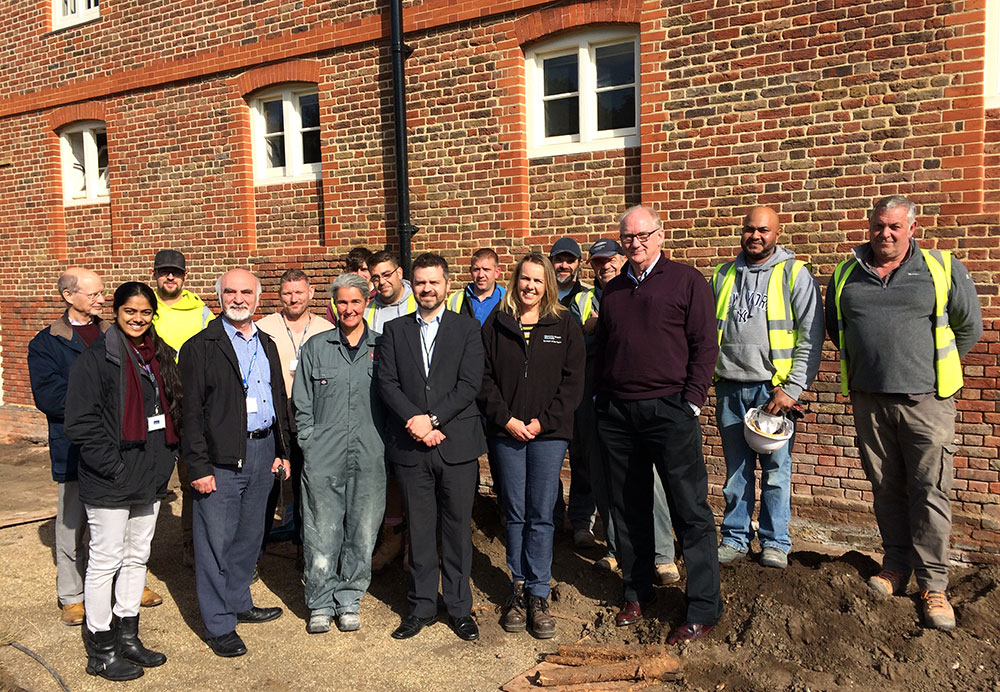 Situated to the west of the main palace adjacent to the principal entrance, and originally comprising two separate blocks, these buildings were built by William III in 1689 for his royal bodyguard and are the oldest purpose built barracks in the UK. The western block housed the Cavalry with the ground floor used for stabling whilst the eastern block housed the Foot Guards. The two were joined together in 1700 by a Sutlery (Quartermasters stores and shop). They remained in use by mounted regiments until 1914.

During routine maintenance work in November 2016 it had become apparent that extensive areas of brickwork were bulging outwards suggesting that the outer skin had become detached from the core. Initial opening up by Historic Royal Palaces (HRP) who are responsible for the building confirmed this analysis.

Commissioned by HRP and working closely with Simpson Brickwork Conservation, Hockley & Dawson structural engineers and DG Consulting quantity surveyors, GHK Architects were appointed to investigate further and develop a repair strategy for dealing with the issue. 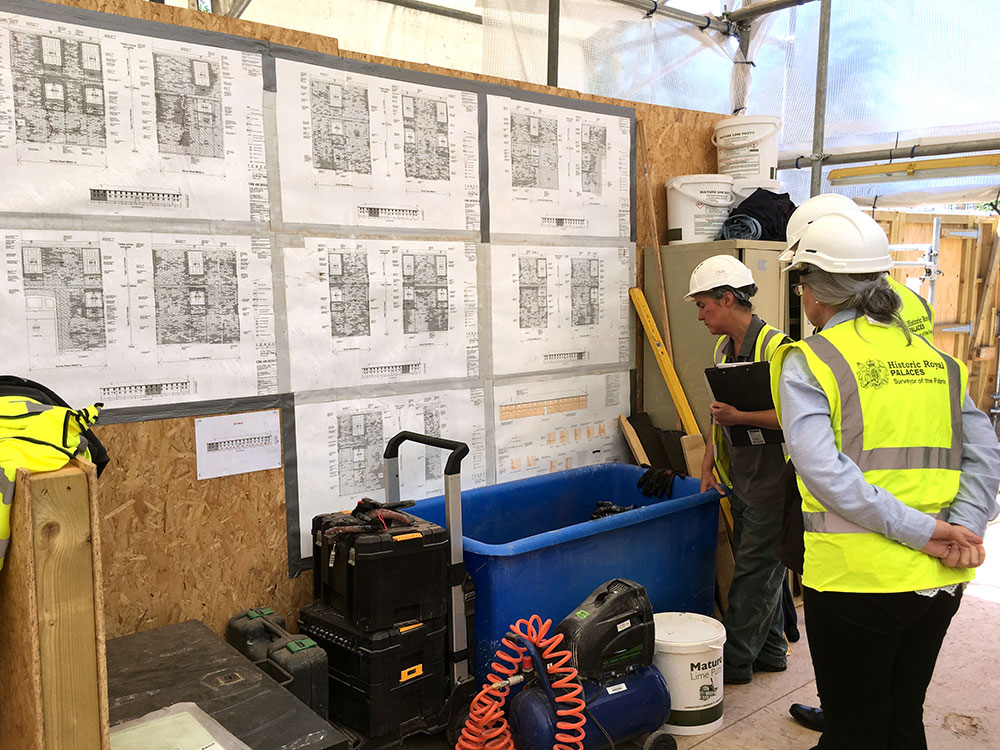 A detailed photogrammetric survey was commissioned by HRP at the outset in order to provide base images and detail drawings showing every brick and detail of the facade. These were then used to record the condition and type of every brick including areas of bulging brickwork, displacement, cracking and inappropriate earlier repairs. Analysis was undertaken by Oxford Archaeology to date the various brick types identified in order to understand which were original and which dated from subsequent alteration and repair. This analysis also extended to the mortar used for bedding and pointing.

The survey and analysis revealed that 3 main brick types had been used in the original construction; essentially two types of a dark red stock brick used for the ground and first floor respectively with a finer textured light red brick used for quoins and window reveals, the same brick being rubbed for use in window arches and string courses. A further 3 brick types were identified as having been used in subsequent alteration and repair.

Inspection of mortar courses revealed traces of a red pigment which strongly suggested that the façade may originally have been ruddled, that is entirely colour washed with a red ochre finish following which the joints may have been picked out with regular narrow lines of a lighter distemper in a process known as pencilling. The original appearance would thus have been very different to the accepted current norm for buildings of this period.

The rubble and brick core of the walls required consolidation.

It was established at an early stage that not only was the brick facing irregularly tied back to the core of the wall, but the core itself was extremely friable and was formed of underfired brick, rubble and lumps of lime mortar infilled as the outer facings were brought up. As such it did not possess sufficient integrity to allow the insertion of additional proprietary metal ties grouted into the core. In any event where there was significant bulging or displacement the wall needed to be carefully taken down and rebuilt. In order to successfully tie back the facing bricks into the friable core it was necessary to use extra-long header bricks which could be 'built' well into the core at regular 450mm spacings. These were fabricated on site to the required lengths by dowelling and resin bonding two headers together.

Given the nature of the core and the extent of separation, it was necessary to take down and rebuild large sections of the facing. At the eastern end of the west block the condition of the core itself was in such poor condition that part of the wall had to be entirely rebuilt. Drawings were marked up at the outset to fully detail the intended works showing areas for rebuilding and indenting of new bricks. Where bricks were to be taken down and re-used these were coded to a key drawing so that they could be reinstated in their original position and to the original coursing line which was often far from level. Detailed records were kept as the work progressed to ensure an accurate record was maintained to show what had been done. Where inappropriate bricks had been used in late twentieth century alterations (principally the creation of the ticket office in 1991) these were replaced with bricks to match the original. The whole elevation was then repointed to replace inappropriate earlier re-pointing and to achieve a consistent finish throughout. 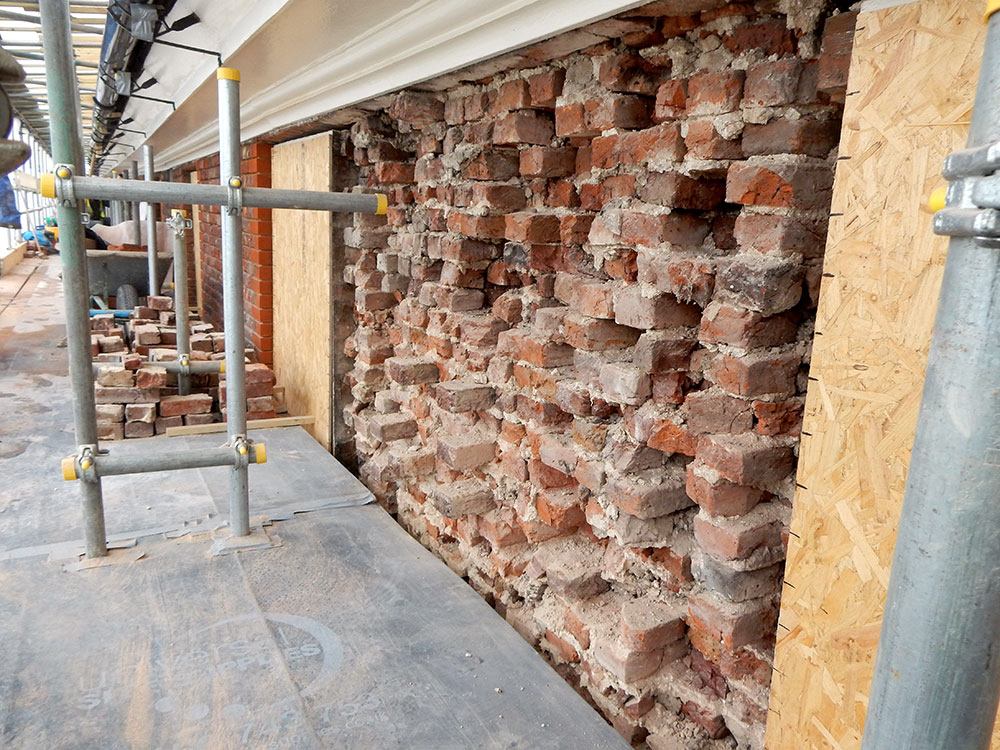 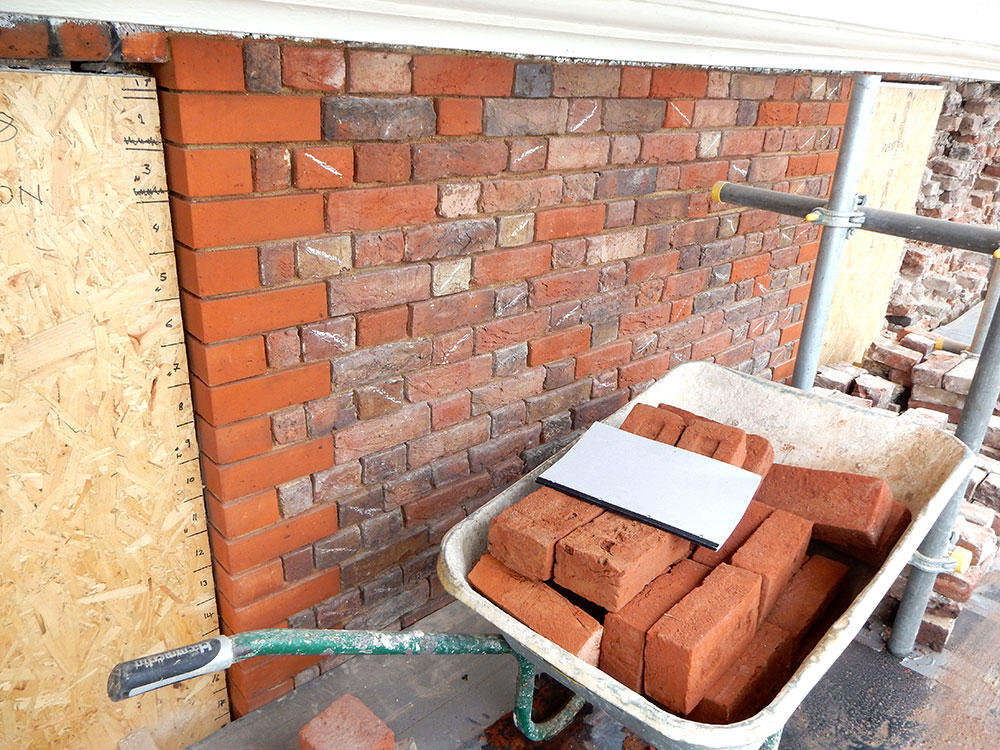 New bricks were handmade by The Bulmer Brick and Tile Company to match the three main brick types identified above. As well as matching size, special attention was paid to achieving a similar variation in colour within each brick type to match the existing on site.

The works were undertaken using a partnering form of contract with the contractor appointed at the outset as part of the team with all parties contributing their expertise towards the final works package.